This weekend, I was combing through some old photos, looking for a specific piece of furniture.  While I didn't find the photo I was looking for, I did run across a couple of interested photos from my trip to Philadelphia back in 2011.

The building itself is a fascinating look at the architecture and building techniques of the 18th century (the building had just been finished in 1774 when it was chosen to be the first meeting house for the Continental Congress).

There are a number of old tools (mostly 19th century but still interesting), some dioramas of colonial building techniques, and a number of banners and flags used by the Carpenters Company of Philadelphia in parades.  But, by far, the best part of the building (at least for an 18th century furniture geek) are the chairs...

Chairs, you might be asking? Zach, you're not a chair maker and you've never shown an interest in chairs... why would you care? Well, dear readers, these are eight of the ACTUAL chairs in which the members of the First Continental Congress parked their rears while beginning to lay the framework of the crazy idea that would ultimately become the nation we know and love today.

I present the pics I (and my wife April) took of those chairs here to you now. Unfortunately, I was unable to get close enough to provide scale, but the chair builders among you should be able to figure it out. 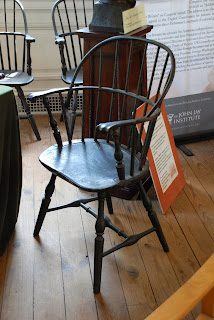 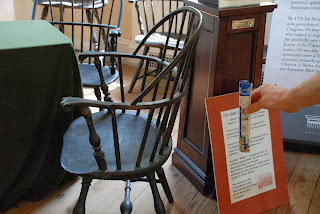 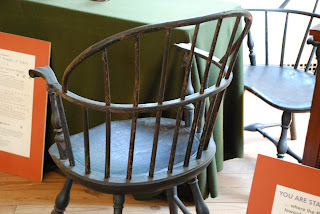 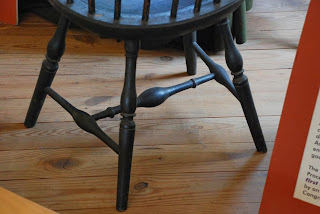 I hope that someone finds this information helpful.
by Zach Dillinger on December 09, 2013