A quick update from the shop. I've been literally tripping over this Champion #101 post drill since I bought it from a Martin Donnelly auction in 2012. It, along with several other tools which I still own, were de-accessioned from the Colonial Williamsburg collection. I finally got sick of it laying on the floor so I mounted it to one of the main posts in my timber frame shop.

Looks great there. It will mostly be decorative but I may get around to fitting a modern chuck to it for actual use. Though, since it took me seven years to hang the thing, I wouldn't hold my breath. 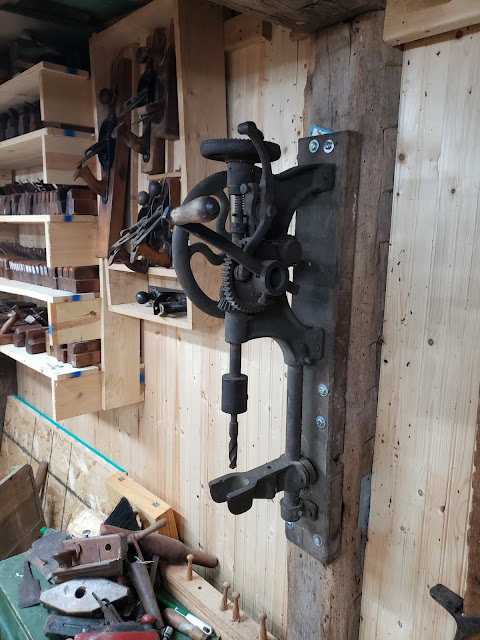 I was in the middle of cleaning this up a bit and oiling the bearings when I heard the local tornado sirens go off. I shut up the shop in double-quick time and headed to the basement with April and Abigail. I managed to stay in the basement for a whole five minutes before venturing outside to see what was happening. It was dark, of course, so I couldn't see anything except the sideways rain flashing in the back door light.

I'm told by my mother that standing outside in dangerous weather is a common trait among Dillinger men. Apparently my dad even had a special storm watching hat, though I simply don't remember. I think I'll adopt the same affectation in honor of my dad Bill.