Home repair with hand tools (and some electric devils)

One of the projects on my summer to-do list is a complete restoration of my porches. My 1900-built farmhouse has two existing porches and one that was removed many years ago (it will be recreated at some point in the future). The north-facing porch is the most in-need of repair, with numerous rotten boards and large swaths of peeling paint which I attributed to improper installation by a previous owner (this attribution proved correct).

In the image below, which was the worst area of rot, you can see that the vertical post supporting the front of the porch was left too long and that the flooring was simply laid right over top of the post. This did two things. One, it humped up the boards which opened the joints and allowed water in and, two, it ruined the slope so that water wouldn't run off properly. I cut this post down utilizing a Rockwell oscillating multi-tool (my home renovation projects are not entirely unplugged...) before installing new boards. The Rockwell is a powered devil, true, but it has earned its keep in my repair kit. 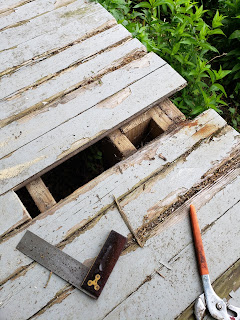 I had to ultimately replace boards in four different areas of the floor, as you can see here. Each replaced board was primed on four sides and each joint was caulked at installation, with the remaining two sides to be primed later. I primed the undersides of all the existing boards that I could reach, so hopefully this will help prevent further damage in the future. 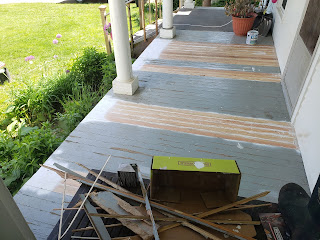 I did use several hand tools in the process, including the wedges from my raamtang vise from Popular Woodworking a few years back. The wedges helped me to draw up gaps in the boards before driving the hidden nails into the boards to lock them in place. 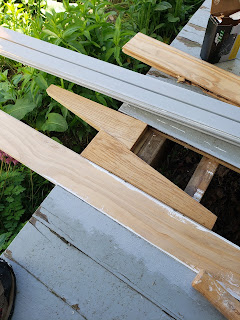 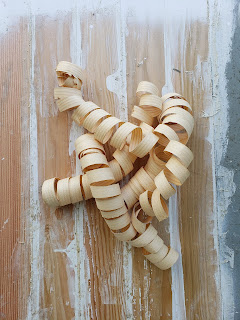 Next up, lots of scraping and sanding, more priming, and then the top coat. I'm also going to be redoing the front porch stairs (they are truly horrendous in appearance) and will be repainting the floors and ceilings as well.

I also want to get this out there now so you can plan in advance. I'll be demonstrating at the Johnson's Wood Expo in September, alongside other truly excellent woodworkers like John Wilson and Scott Phillips of The American Woodshop. If you've got copies of my two books, With Saw, Plane and Chisel or On Woodworking, bring 'em along and I'll sign 'em. I'll also have a few copies to sell there. I hope you can make it.