I clamped the roughly-shaped molding blank to the backer board and used a rasp to shape them as perfectly as  I could. I then used that line to shape the inside edge of the molding blank.  By doing the steps like this, I ensured that the two edges are parallel with each other (except towards the top of piece, where the width of the molding should slightly narrow). Shaping the bottom edge is nearly impossible once the piece is glued down, so it must be done now. I also cut the miters on the molding blanks, as this would have been difficult to do later on.

After this was complete, I then glued the blanks into place using hide glue. Once the glue was set, I rasped down any slight inconsistencies between the edges and sanded them by hand to 220. This is the last time I will touch the outside edge unless I mistake... knock on wood. I also smoothed down the back of the facade board and cut a shallow rabbet with my moving fillister to ensure that the board is a consistent thickness where it glues on to the top of the case... no need to make the whole thing the same thickness, just that small area. 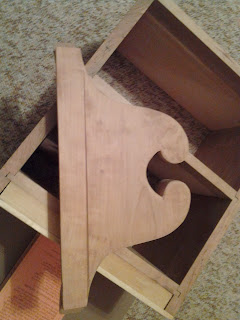 Once done with this, I started to lay out the volutes. I used a purfling cutter (with only one tooth extended) to mark the curved edge of the fillet at the top of the molding.  These two lines (the outside of the molding and the marked edge) will define the area of the volute that is left untouched. Everything else will be carved or shaped away. 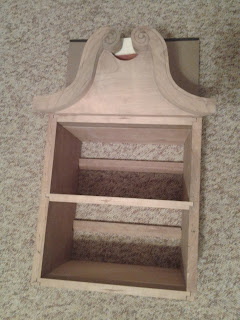 Over the holiday, I will be carving the volutes and shaping the molding, as well as building the sash door.  Slap a finish on this baby, install some hardware, and it will be ready for photography / sale... although a nice inlayed mariner's compass would look outstanding on the facade (smaller than the example shown)... maybe a half mariner's compass emanating up from the door to resemble the tombstone effect seen on many clock hoods... might have to go buy some ebony and holly veneer from Johnsons Workbench on Saturday...