I purchased a carriage makers tool box earlier this year at an antique mall. Pictures are attached. For everything you see, I paid the princely sum of $200. A partial inventory follows: 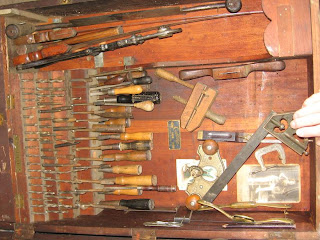 Left side of the box 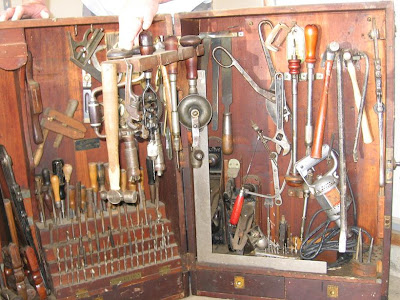 The Whole She-bang, including the Girly pictures!
There is so much in this box that it is going to take me quite some time to inventory it all. Once done, I will make sure to post it to the Creek. Apparently the original owner worked at Clark - Carter automobiles as a carriage maker. The company only existed for two years, 1911 and 1912. They entered a car in the 1912 Indy 500, but soon folded due to lack of money. The box itself has a Cutting Autos tag, so I'm assuming it was company property that the original owner took with him when the company folded up.

Enjoy! Anybody have any idea how rare the Stanley 94 rule is? I've never seen one before buying this one.
by Zach Dillinger on October 01, 2009